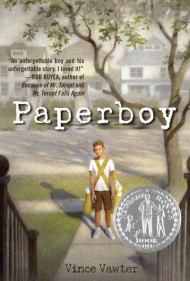 When his best friend goes on vacation, 11-year-old Victor Vollmer agrees to take over his paper route for a month. Victor is confident he can toss the paper from the sidewalk to the porch with accuracy – he’s the star pitcher on his baseball team. But having to ring doorbells and speak with strangers to collect the weekly subscription fee fills him with cold dread because he stutters.

Victor’s speech disability has left him extremely isolated, even in the home he shares with his parents, a loving but workaholic dad, and a mother who (maddeningly) holds her only child at a distant remove. With his best friend away, Victor’s only real company is the family’s housekeeper. Victor calls her “Mam.” She calls him “Little Man.” It’s better than the names they call him at school, and better than his given name, which begins with a sound so troublesome it isn’t until the very end of this compelling first novel that he summons the courage to try to say it aloud.

It’s the paper route that changes Victor’s life, forcing him to engage with the wider world, whether it’s the beautiful but drunken Mrs. Worthington, or his favorite customer, Mr. Spiro, who relates his passion for books, travel, and learning. There’s danger on the streets of segregated Memphis, circa 1959, too. Early in the story, the knife Victor needs to cut open his newspaper bundles is stolen by a deranged local junkman. The specter of waiting for that knife’s reappearance gives the plot a shivery tension.

The most artful element of this first novel, however, is the way it’s constructed. Vawter, a retired newspaperman, tells Victor’s story in the first-person, in short, block paragraphs, without quotation marks or commas, which Victor admits are the bane of his existence. “I hate commas…. My composition teacher said a comma meant it was time for a pause.  I pause all the time when I’m trying to talk whether I want to or not.  Humongous pauses.  I would rather type a gazillion ands than one little comma.” Vawter writes in an author’s note that he had to learn to overcome a stutter himself and his depiction of a boy struggling to do something that comes so easily to most feels deeply authentic. The reader empathizes with Victor’s frustration as he tries so valiantly to push the word on his tongue out into the world and cannot make it happen. It makes the moment at the end when he finally manages to introduce himself to his new seventh grade classmates an utterly triumphant one.

But Victor’s story is about much more than overcoming a physical hurdle. This is a coming of age story about a boy whose first job helps him see his entire world in a new light, a light that illuminates a path he will follow to a better, more confident future for himself.