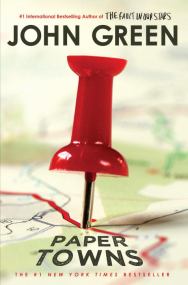 This book follows the beginning of a not-so-typical love story that involves the two main characters named Margo and Q. These two characters experienced something that bonded them together; however, as years passed, they had drifted apart. The novel not only has a love story, but also involves a mystery as one of its subplots. After Q helps Margo with an elaborate plan to get back at some people at school that she felt treated her badly, Margo disappears. Q uncovers clues that she has left behind, and he is able to find out where she is hiding. The clues give the book a driving force and builds the plot to keep the reader interested.

The book is divided into three parts: The Strings, The Grass and The Vessel. Each section brings in a different part of growing up and finding yourself. The first section is breaking out of the norm, the second discusses friends and family and how they influence people's life and the third is about a journey and what happens when you reach the final destination. Each of these sections depict Margo losing herself and trying to find the realness in everything, which plays into the name Paper Towns. A paper town is a town that looks good from the outside but up-close is a mess. A lot of people can relate with the idea of disillusionment and believing in something that is not as great as you thought it was. Margo is a metaphor in that she was seen as something she wasn't. Having the main character represent something so important makes the book mature and well-done. This book does include some more mature topics, like sex, and includes heavy language. Its depth and complicated storyline make it a favorite.