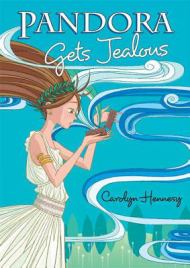 The Prologue of this nifty, tongue-in-cheek little novel explains how, during the golden age of men and gods, Zeus became enraged at the lazy humans who took the gods for granted and removed fire from the earth as punishment. Prometheus, the Titan, stole the fire from Mount Olympus to give back to mankind, which is why Zeus hunted him down and had him chained to a rock so an eagle could gorge on his liver each day. What you might not recall is that Zeus finally set Prometheus free, and as a reminder of his misdeed, made him caretaker of a small wooden box filled with all the miseries that would bring torment to mankind if someone were to open it. "Promethius was tormented and troubled. And then he married. And then he had a daughter. And then . . . she turned thirteen."

Pandora Atheneus Andromaeche Helena, known as Pandy, is singled out by the very boring Master Epeus at Athena Maiden Middle School. He threatens Pandy and the whole class with punishment if they do not garner at least one bronze medallion at tomorrow's judging of the annual school project, with this year's theme being "The Enduring Presence of the Gods in Our Daily Life." Pandy's girlfriends, Iole and Alcie, have their projects planned, but Pandy is stumped. Iole tells her, "Please don't bring your dad's liver again. Master Epeus will absolutely give you a delta." What can she bring? Looking around her parents' bedroom, Pandy stumbles upon an odd metal case. Inside it is a box her father has made her promise never to touch. She knows that all the evils of the world are in it. What if she brought it to school? "Of course she wouldn't open it. Duh." And she might even get an alpha on the project. Of course, the box gets opened, though to be fair, some of the blame should fall on that pretty, blonde, popular, and mean cheerleader, Helen, who insisted on holding it. And now, thanks to Pandy, mankind is doomed. Pandora is summoned to Mount Olympus where she is commanded by Zeus to set out and find the first of the seven plagues she has caused to be released.

First-time author Carolyn Hennesy, also an actress on General Hospital, demonstrates that  thirteen-year-old girls in ancient Greece, even demigods, could be just as catty, quarrelsome, and impetuous as modern-day Valley girls. There's a glossary at the back with a pronunciation guide, which is useful. There will be six more books in the series (one for each evil), which of course you'll want to pair with a modern day look at the gods in Rick Riordan's The Lightning Thief and the other smashing books in his Percy Jackson and the Olympians series. Use both to introduce the 292 and 398.2 sections of your library where Greek myths can be found.