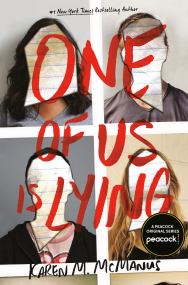 One of Us Is Lying

Are you looking for a new twisty, addictive YA book? One of Us Is Lying fits the bill. Reminiscent of The Breakfast Club, this book is a mustread for fans of E. Lockhart and Sara Shepard.

Similar to the cult classic, the book starts off with five students in detention—the brain, the beauty, the criminal, the athlete, and Simon, the outcast, a snarky and confident know-it-all who actually doesn’t survive detention. That’s right, by the middle of detention, Simon winds up dead. The police don’t believe it was an accident, and evidence is unleashed that Simon was going to post secrets about his classmates the day after his death. It gets even better: the classmates he had the dirt on were the very ones he was serving detention with. The real question is, who killed Simon? Did his peers band together to bring him down, or are they just covers for the real killer? Each member of that fated detention has secrets. To ensure that the secrets don’t come out, what lengths will they go to?

Filled with suspense, humor, romance, and self-discovery—and of course centering around Simon’s untimely and mysterious death—the pages of this novel race by, and readers will be scrambling to figure out who killed Simon and why. McManus’s debut is the perfect book to curl up with when you are in the mood for a little bit of everything. You will become enraptured by the world she creates and the problems her characters encounter. High school teens will enjoy this book because of the internal struggles each character is going through, and adults will appreciate the characters’ journeys to self-acceptance—a universal theme. McManus does a fantastic job of giving a natural and at times humorous voice to all of these high schoolers, making her novel captivating. I highly recommend it.

“You’ll tear through this juicy, super-fun (if murder can ever be fun?) thriller.”—Bustle.com

“A whodunit with a Breakfast Club twist…following four unique voices on a chase to find the killer, this one will keep you guessing until the very, very end.”—Popcrush

“An addictive, devour-in-one-sitting thriller with so many twists and turns you’ll be wondering until the very end: Who really killed Simon?”—Kara Thomas, author of The Darkest Corners and Little Monsters

There’s Someone Inside Your House by Stephanie Perkins