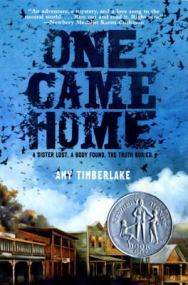 “It was the day of my sister’s first funeral and I knew it wasn’t her last - which is why I left.”

Thirteen-year-old Georgie is as no-nonsense as they come - a sharpshooter with a sharp tongue. She feels guilty that her older sister Agatha ran away in the first place, she’s angry that her grandfather didn’t track Agatha down, and she feels sure that the girl they are burying - left out in the elements and mostly unidentifiable - is not Agatha. So Georgie resolves to find her.

Georgie narrates the tale in the raw, self-important, repentant, sometimes comical voice only an adolescent possesses. Information about life in a small Wisconsin town in 1871 and the prospects for women are deftly woven-in. Good with numbers, Georgie is content to inherit the family store and is shocked that Agatha doesn’t share her dream. Agatha would like to go away to college; next-best is her impending marriage to a man with an impressive library. But Georgie is responsible for ending Agatha’s engagement, prompting Agatha’s departure.

After a day of target shooting - where she does her best thinking - Georgie plans her trip. She’s got money, a Springfield single shot-rifle and a horse she borrows from Agatha’s childhood sweetheart, Billy. What she did not intend is that the horse would be a mule as stubborn as she or that Billy would accompany her. She certainly did not prepare for run-ins with Billy, cougars and, worse, counterfeiters willing to kill to keep their operation secret.

The descriptions of the rugged travel, complete with her interactions with closed-mouthed townsfolk and the ornery mule, always feel true as do Georgie's discoveries. For while Georgie initiated the journey to learn Agatha’s fate, she also uncovers her own hidden strengths and matures as she confronts challenges. She is no longer so quick to pull the trigger and emerges more thoughtful than before. This is a page-turning, history-mystery/western adventure sure to set readers on fire. They will long to meet Georgie on the trail again.