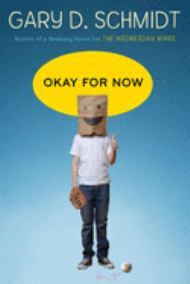 “Terrific.” That is fourteen-year-old Doug Sweiteck’s sardonic response to pretty much everything, say Maryville, a tiny upstate New York town where his family has abruptly moved from Long Island in the late summer of 1968. With the dubious help of a shifty friend, his father has found a factory job and complains bitterly and unceasingly about the pay, his boss, and pretty much everything else. That is, when he’s not pounding away literally and figuratively on his sons. He’s got three – in addition to his youngest Doug, there’s his juvenile delinquent middle son (who also pounds on Doug) and Luke, the oldest who is serving in Vietnam as the story begins. The one family member that all the family males seem to care deeply about and vice versa is their mother who scurries quietly about coping with the harshness of their lives.

But this is not a story about harsh lives as much as it is about getting beyond and above harshness and hard times. Drifting aimlessly through his new town Doug happens upon the town library where he encounters an Audubon painting of an arctic tern in a book on display and is captivated by it. A kind librarian notices his repeat visits and begins to teach Doug how to draw it and other birds in the book. A girl named Lil notices, too, and before long Doug has a very good friend, a job delivering for her grocery-storeowner father, and is beginning to connect to people in the town. School opens and after a rocky start, Doug starts to learn in ways he hadn’t in Long Island. Things\might even be going well for him, but just as he begins to settle in, his brother Luke returns from Vietnam creating more complications for the family. The war, in fact, is an underlying presence throughout the book as it turns out that several people Doug encounters have been affected one way or another by it.

The somber aspects of the novel are lightened by many delightful moments of humor, lightheartedness, and joy; it is all and all, a moving and transcendent reading experience. Doug first appeared as a minor character in Schmidt’s Newbery Honor title, The Wednesday Wars, and while the books work nicely as companions Okay for Now stands beautifully on its own.

This is Schmidt’s best novel yet; darker than The Wednesday Wars and written with more restraint, but with the same expert attention to voice, character and big ideas.
Kirkus Reviews

Readers will miss Doug and his world when they’re done, and will feel richer for having experienced his engaging, tough, and endearing story.
School Library Journal