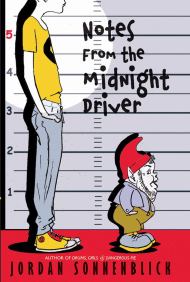 Notes from the Midnight Driver

Did you ever notice how serious, somber, and edgy so many YA books are, with all those screwed up teens, life and death dystopian situations, not to mention never-ending angst and alienation? When's the last time you laughed out loud while reading a YA novel? Oh, right, Sherman Alexie's The Absolutely True Diary of a Part-Time Indian. That was funny. And, come to think of it, books by Gordon Korman, David Lubar, and Neal Shusterman will crack you up, too. To that short list, add Jordan Sonnenblick, a former middle school English teacher who has witnessed teen agony in the trenches and lived to write about it.

"It seemed like a good idea at the time," sixteen-year-old Alex states in the first sentence of his retrospective narrative. Furious about his parents' separation and recent divorce, and especially at his father who is dating Alex's former third grade teacher, the teen describes his original idea to drive to his dad's house and confront him. "The plan had a certain elegant simplicity, too. I would drink one more pint of Dad's old vodka, grab Mom's spare car keys, jump into the Dodge, and fire that sucker up." Unfortunately, never having gotten drunk before, Alex didn't realize how difficult it would be to drive. The next thing he knew, he had crashed his mother's car on a neighbor's front lawn, decapitating a lawn gnome, and thrown up all over the well-polished shoes of the responding police officer. After being arrested and booked at the police station for drunk driving, he wakes up in the hospital, his parents arguing by his bedside, an IV in his arm, with alcohol poisoning, a concussion, and stitches in his forehead.

In court, the judge sentences him to 100 hours of community service, ten hours a week, volunteering at the Egbert P. Johnson Memorial Home for the Aged. He is assigned to work with Mr. Solomon Lewis, a cantankerous, acerbic old guy with emphysema, who insults Alex in something called "Yiddish," yet. Mr. Lewis barks, "Sit up in that chair, you little pisher . . . My last volunteer was such a schmendrick, he needed Velcro shirts because he couldn't do buttons . . . In the meantime, why are you here irritating defenseless old men when you should be in school, learning to hold a pencil or something?" Flummoxed, Alex writes a letter to Judge Trent, explaining that Mr. Lewis is abusive, and suggests, "The home should replace me with a psychiatrist/linguist/paramedic/saint, and the court should find me a new assignment that will be less traumatic for my sensitive adolescent mind." The judge is amused but unmoved. How Alex learns to relate to Sol, becomes a better guitarist, reconciles with his dad, and becomes more than pals with his best (and only) friend, Laurie Flynn, is recounted in Alex's breezy, sometimes self-aware, sometimes clueless, fast-moving narrative that will keep readers chortling.

Even minor characters, such as Alex’s parents and the judge, take on a heft and weight uncommon in YA literature… It all adds up to a funny, bittersweet tour de force.
Booklist

Sonnenblick, Jordan. Zen And The Art Of Faking It. Scholastic, 2007.