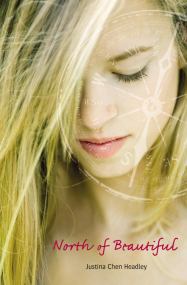 Terra Rose Cooper can't seem to escape. A permanent port-wine stain birthmarks her face, which causes stares from any and everyone she meets. Friends and family are no help. "Why not fix your face?" her own boyfriend, Eric, asks her. Her map-maker father discourages her from any surgery, but also sneaks in comments about her unattractiveness whenever he feels the need. The only similarity she has with her father is her obsession with maps and geography, but she's too afraid of his nasty put-downs to show him her art collages that mirror the cartographer's own work. She can't wait to escape from her small hometown in Washington to Williams College (a year earlier than her peers), whose greatest asset in her mind is its distance from home.

"Frenzied activity as a matter of survival was my modus operandi, too. People may have thought I was padding my résumé, but really, wasn't I juggling a job, doubling up on coursework, not to mention signing up for virtually any extracurricular all to keep from spending any more time at home than I had to?" When Terra meets adopted Jacob, who also bears an unusual facial scar, his newly introduced family becomes a beacon of hope for Terra and her mother to escape. And then an opportune trip to China presents itself.

Terra's mother is the most heartbreaking character of all. Although the whole family suffers from their father's sneers, Lois Cooper retreats to food, silence, and general submission. As angry as she is at her father, even Terra dismisses her mother in the same vein as he does: she is too fat, embarrassingly overweight. North of Beautifulpaints a refreshingly realistic portrait of American home life, however gloomy it can be. Complicated relationships force Terra to mature beyond being scared of what others might think of her. Everyone hides behind something, be it Terra's makeup and overachieving activities, or her brother's busy career, or her boyfriend's superficiality. Most of these issues are left unresolved, offering teenagers brave insight that they are not alone in their imperfections. North of Beautiful is a funny and insightful novel that will have readers questioning the pressure and judgment they meet, or have already met, in teenage life.