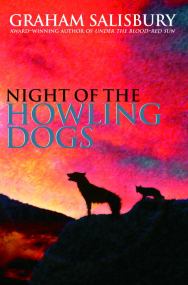 Night of the Howling Dogs

Camping with his Boy Scout troop on a remote beach on the Big Island of Hawaii on November 29, 1975, Graham Salisbury's cousin, then 13, survived a massive earthquake followed by a tsunami. Now the author has retooled that momentous experience into a fine and thrilling adventure novel narrated by Dylan, an eighth grader looking forward to his weekend camping excursion with seven other scouts. There's trouble brewing in the form of Louie, a tough Hawaiian kid with a chip on his shoulder who once threatened Dylan. With their two adult leaders, the scouts set out on a searingly hot 12-mile hike from a cliff on Mauna Loa, 2,000 feet above sea level, to a secluded coconut grove by the ocean. There they swim, get stung by wasps, tell ghost stories, and get scared by a shark. On the morning of the third day, their idyllic world falls apart. First there's the earthquake, which brings down the cliff in a hail of boulders, and then the wall of water bearing down on them like a mountain. Dylan and Louie must team up to find the others.

The nonfiction book Tsunami: The True Story of an April Fools' Day Disaster by Gail Langer Karwoski describes the wave that struck Hilo, Hawaii in 1946 and killed 150 people. If readers are wondering how they’d survive a disaster, they can read up on tips, techniques, and survival skills in Boy Scout and Girl Scout manuals and Conn and Hal Iggulden's bestseller,The Dangerous Book for Boys.