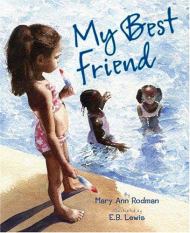 Oh, the heartbreak of liking someone who doesn't like you back. The narrator, six-year-old Lily, yearns to be noticed by seven-year-old Tamika at the neighborhood pool on Wednesday playgroup day. Lily is ever hopeful, claiming, "Tamika is my best friend. She just doesn't know it yet." Tamika ignores her in favor of her mean friend, Shanice, who calls to Lily, "Hey, Whale Girl. Your be-hind is hanging out of your suit." Lily then gets a new two-piece bathing suit, but the heartless Tamika sniffs, "That's a baby suit. I used to have one just like it." Lily shares her popsicles and floating noodles, but Tamika simply takes these kindnesses for granted.

There's another six-year-old girl at the pool, patiently waiting in the wings for Lily to acknowledge her. Keesha is always nice to Lily, complimenting her bathing suit, appreciating Lily's diving skills, and sticking by her in spite of Tamika's snubs. The shimmering watercolors will make you want to go swimming in the sun, and the winsome portraits of Lily capture her longing, hopefulness, and final recognition, acceptance, and appreciation that Keesha is a real friend and Tamika is not.