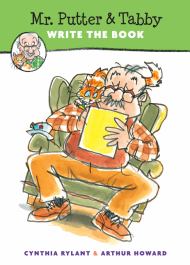 Cynthia Rylant's easy readers have changed children's reading, with her whimsical and wise series about young Henry and his great Dane, Mudge; Poppleton the pig and his animal pals; and, most endearingly, the grandfatherly, avuncular Mr. Putter and his sweet, elderly, but dignified orange kitty, Tabby. In their many little adventures (which work just as well for reading aloud as reading alone), the two have baked a cake, painted the porch, fed the fish, and caught a cold. In this, their 13th book, Mr. Putter and Tabby are stuck inside after the big snow-they can't go out; they might break something. That's when Mr. Putter gets a wonderful idea: he has always wanted to write a mystery novel.

"He had everything a writer needed: a soft chair, a warm fire, and a good cat. Andhe had a pen and plenty of paper." Mr. Putter says to Tabby, "I shall call my book 'The Mystery of Lighthouse Cove." He is so pleased with his title, he decides to fix a little snack. He makes "a big apple salad, a pan of corn muffins, some custard pudding, and a cheese ball. Mr. Putter spent three minutes on his title and four hours on his snack. Then he took a nap. Mystery writing was not easy work." In three chapters, which span three days, Mr. Putter proves himself an ace procrastinator, finding endless chores to do (stoking the fire, cleaning Tabby's ears, moving his chair, fixing snacks, taking a bath, and, of course, napping) instead of writing. "Mystery writing wore him out."

At last, he begins to do some deep thinking about all the good things in his life, and he compiles a list of them, calling it Good Things. By the end of day three, the snow has melted, so he is able to venture next door to see his good friends, Mrs. Teaberry and her bulldog, to whom he reads his list. Mrs. Teaberry, ever supportive, says, "The world is full of mystery writers. But writers of good things are few and far between." Arthur Howard's pencil, watercolor, and gouache illustrations of the rumpled, bespectacled man are homey and endearing.