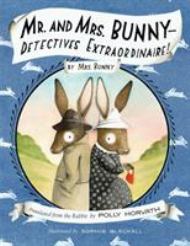 Award-winning author Polly Horvath sets up a perfectly preposterous premise and a romping pace that will keep readers hooked.

Madeline, a human child, finds her ordinary world intertwining with the local animal societies when she comes home to discover that her spacey hippie parents have been kidnapped. Despite being almost run-over by a bunch of foxes (foxes?!) driving a sedan, Madeline rushes to Uncle Runyon for help, bringing with her the only clue she found: a card that reads Fanny Fox’s Canned Rabbit Products and By-products followed by encrypted text. Unfortunately, Uncle Runyon, famed code-breaker, falls into a coma just as he’s about to crack it. Enter the Bunny detectives who agree to take on the case. (Madeline was just beginning to think she was hallucinating all these car-driving and talking animals, but she’s thrilled to learn she’s a Bunny whisperer!)

There is a broad comedy to the writing with some scenes influenced by the Stupids and nods to beloved children’s books such as when Madeline – like Pooh – gets stuck in the Bunnys’ doorway. Mr. and Mrs. Bunny are a little harebrained, and hilariously-deadpan illustrations capture the Bunnys’ indecipherable wide-eyed stare even as events get curiouser and curiouser. Eventually they seek the help of The Marmot to decode the card but, uncouth and plagued with a short memory, he uses their only clue as toilet paper after gorging himself at the Olde Spaghetti Factory (every rabbit town has one).

Readers know all along that the kidnappers are foxes (“titans of industry. Have you never heard of  “Fox Studios?  Fox Television?”), who will open a factory once they can decipher Fanny Fox’s recipes so the adventure and laughter come from watching Madeline and the Bunnys, with a dose of Marmot diversion, solve the case. The daring rescue is brilliant, with the rabbit SWAT team donning hound heads to roust out the foxes. The Bunnys are none too impressed with Madeline’s parents who are mostly concerned with rebalancing their chakras after their ordeal, but The Marmot may finally prove useful as a window-washer (wrung out, marmots make good squeegees). And although Mrs. Bunny declares herself done with detecting, the escapade has given her material for her new career as a writer. Youngsters will certainly count themselves among her fans.