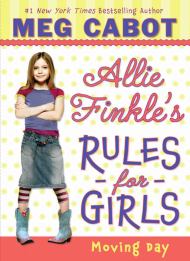 "Rule #1: Don't Stick a Spatula Down Your Best Friend's Throat." That's the first of Allie Finkle's many engaging chapter headings and rules, along with her explanations of each one, which she's been recording in a notebook. There’s "Never eat anything red." Which is partly to blame for her little problem with her annoying best friend, Mary Kay Shiner, who insists on making cupcakes with strawberry frosting, which is more pink than red, but still. She's kind of sick of Mary Kay's constant whining, but when Allie breaks the "Treat your friends the way you want them to treat you" rule and is mean to Mary Kay and makes her cry, she still feels bad about it. Now Allie’s parents tell her they've just bought a falling-down Victorian house, that she'll be starting fourth grade in a new school, and that she can get a kitten. While she sure wants the kitten, she doesn’t want to move to that creepy, probably haunted house, and she does her best to sabotage the sale of her own house. Don’t worry—she’s moving. She is just having a hard time learning a new rule: “You can’t go back.” This is Meg Cabot's first series for pre-angst girls, though I'm betting boys will sneak this one as well. Allie is no perfect kid, but she's funny and real and you'd want her for a friend, even if she is the new girl. I thought the second book in the series, Allie Finkle's Rules for Girls: The New Girl, was even better, but kids will want to read them in order.

Meet other rule-making (and rule-breaking) kids, including Bud in Christopher Paul Curtis's Bud, Not Buddy and Catherine in Cynthia Lord's Rules. It would also be fun to pair compulsive listmaker Allie up against her polar opposite, the easily distracted Moxy, in Peggy Gifford's Moxy Maxwell Does Not Love Writing Thank You Notes.