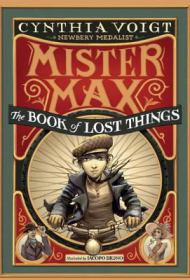 Maximilian Starling is not your average twelve-year-old boy. For starters, he’s the only child of an actor and actress and he plays many roles in their theater. Both of his beloved parents are flamboyant, dedicated to their craft, and unpredictable.

Just when Max thinks he’s accompanying his parents on an exciting trip to India, his parents vanish. Did they leave him behind on purpose? Were they kidnapped by pirates? His parents left a note that “made absolutely no sense, made so little sense that it had-somehow-to make sense that it made no sense.”

Fortunately for Max, his grandmother lives right next door, and was happy to look out for him. Unfortunately for Max, his grandmother earns very little money working as a librarian. Max will have to find a job to earn money for food and his other expenses. Despite his loneliness and encounters with a foreign woman who seemed to be pursuing him, Max wants to stay in his own house.

Max’s father had often bragged about his “fortune” surrounding him in his own house as he ate breakfast every morning. Most people assumed that Max’s father was referring to Max and his mother as his “fortune.” But what if there was an actual fortune? Max wanted to be where he could search for it and keep it safe from marauders-even if the fortune and marauders were unlikely.

Max sets out to look for work, dressed as an impoverished university student. He doesn’t find work, but he does find a lost child. The child leads him to Gabrielle, the most  gifted pastry chef in the city. Gabrielle leads Max to the lost child’s mother. The mother gives Max money and offers to recommend him to all her friends who have lost things.

This recommendation leads a man and his daughter to hire Max to find their lost dog. Max is beginning to realize that he is good at finding things and solving problems. His experience acting in the theater and his amazing gift for costumes make him the perfect detective-in-disguise. He decides to call himself Mister Max-Solutioneer.

When Max is hired by a wealthy and haughty baroness, his adventurous life ramps up into a break-neck pace. In addition to his “solutioneering,” he’s still looking for clues to solve the mystery of his missing parents. Along his way, he takes in a boarder, makes a great friend, finds a treasure, reunites long-lost lovers, and exposes a charlatan fortune teller. Among many other unlikely romps.

Readers will be happy to know that “Mister Max-The Book of Lost Things” is the first book of a trilogy.