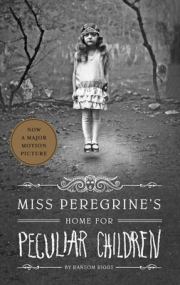 Throughout Jacob’s childhood, Grandpa Portman regaled Jacob with stories about how his parents in Poland had shipped him off to a children’s home in Wales because monsters were after him. The monsters “stank like putrefying trash; they were invisible except for their shadows; a pack of squirming tentacles lurked inside their mouths.” As for the children in the home, they had fantastic talents – one could levitate, another was invisible, siblings were strong enough to lift boulders. As Jacob gets older, he comes to believe that Grandpa Portman’s tales are not literal truth but symbolic: the monsters are the Nazis; the children, the persecuted innocents. As such, readers will be as shocked as Jacob when he discovers his grandfather in the woods outside his home, dying as a result of huge claw marks across his chest while a tentacle-tongued monster stands by. With his dying breath, Grandpa Portman tries to warn Jacob and even appears to him in dreams, “find the bird, find the loop, Yakob vai don’t you understand you goddamned stupid yutzi.”

The author superbly builds anticipation by creating a profile of the hapless Jacob and his privileged life before unleashing the terror. Will Jacob be up to the challenge? He spends months paralyzed by grief and fear before he finds the first clue leading him to Cairnholm Island and Miss Peregrine. On the island, Jacob passes into a time loop, equal parts paradise and nightmare, as he plumbs the depths of Grandpa Portman’s story, his strange abilities, and the foes he spent his life fighting. The storytelling is nuanced and draws readers irresistibly deeper as the menace increases, love blossoms, and an army of peculiar children combine their talents in a superhuman effort to banish soulless abominations hell-bent on becoming god-like time-travelers. The pace is unrelenting, although studded with comic breaks. Vintage photos representing the eerie cast will leave readers mesmerized. Once immersed, this is a time loop/book readers will not want to leave – they will be glad to know there will be a sequel.