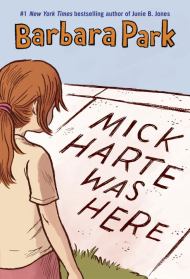 In an affecting novel almost too heartbreaking to read out loud, though it alternates between tragic and comical, eighth grader Phoebe takes us through the harrowing days following her adored brother's death in a bicycle accident. Mick, only ten months younger than Phoebe, was a funny kid and Phoebe recalls the many zany things he did. In sixth grade, he dressed as Thomas Crapper, inventor of the modern day flush toilet for Halloween. In fifth grade, he was King Henry VIII, and attached his beard with Super glue, which is why he had to wear the beard to school the whole next week. In kindergarten, he found a cigar on the street. The wrapper said, "It's a girl," so he named it Helen. Phoebe's loss is palpable; she wants to know just where he is now, after he has been cremated. Is he in heaven? Is he lonely? Scared? Her precise, controlled chemist parents don't know how to comfort her or themselves. At the memorial service, it's the many stories people tell about Mick's life that help the most. Back at school, though, Phoebe is unnerved by the responses of the other kids. She's become famous. "Hey, look. There's the sister of the dead kid," says one. Others stare and say nothing, not knowing how they should react.

Readers will need to keep tissues on hand as they read, even though Phoebe's portrait of Mick is so wonderfully funny and the story is life-affirming. The climax, where Phoebe reveals at a school bike safety assembly that Mick died because he thought wearing a helmet made him look like a dork, is devastating and sobering. This book will make kids think about life, siblings, loss, and how every action has a consequence. They'll make connections to their own lives as it takes them through the awful, but necessary, stages of grief. For some, it will be their first connection with the death of a contemporary, and it will stay with them.