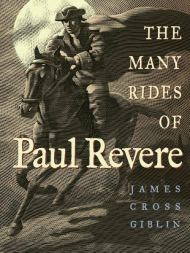 The Many Rides of Paul Revere

Get to know the man behind the legend and the famous ride in a clearly written and handsomely laid out biography amply illustrated with stately brown-toned portraits, paintings, reproductions, maps, and photographs. As an apprentice to his French-born father, a master silversmith, Paul learned the family trade but also served in the Massachusetts militia alongside the British during the French and Indian War, and then became enmeshed in politics with the leading thinkers of Boston. The most compelling chapters deal with Paul's involvement as "The Messenger for the Revolution."

Appended is the famed poem by Henry Wadsworth Longfellow, "Paul Revere's Ride," and a comparison between the events as Revere lived them and the liberties taken in the poem. Next is a detailed timeline of his life; a map of Boston with an annotated list of sites to visit in Boston, Charlestown, Lexington, and Concord; an annotated bibliography; and a thorough index. Grand for book reports and Revolutionary War studies and just plain enjoyable reading for history buffs, this will also be a fine book to pair with Robert Lawson's classic fiction book, Mr. Revere and I, as told by his faithful horse, Scheherazade.