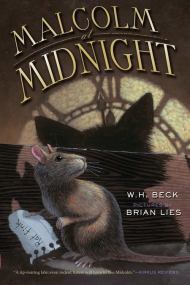 “It began with a rat. There was also a glasses-wearing elderly iguana, a grumpy fish who could spell, a ghost in the clock tower, a secret message in the library, and a twisted evil that lived on the fourth floor of our school. But those’ll all come later. First, there was a rat: Malcolm.”

And what an extraordinary rat he is! After being fortuitously mistaken for a mouse at the pet store, Malcolm finds his way to Mr. Binney’s fifth grade classroom at McKenna Elementary School. Life at McKenna is much different from what he is used to, but Malcolm doesn’t mind. He has a Comf-E-Cube for a bed, a water dispenser, plenty of kibble, and the occasional oh-so-delicious crumb; as well as the undivided attention of a room full of fifth graders.

The children, also referred to as “nutters,” aren’t the only ones to notice and take an interest in Malcolm. The Midnight Academy, a secret organization of classroom pets working to ensure the smooth operation of the school, quickly takes Malcolm under its wing.  But when Malcolm’s true identity as a rat is revealed and the leader of the Midnight Academy goes missing, all eyes turn to Malcolm as the prime suspect. For, as everyone knows, rats are not to be trusted.

Malcolm must then embark on a quest to rescue the leader of the Midnight Academy and clear his name, solve the mystery shrouding the fourth floor of McKenna Elementary, and find a way to prove that the labels and stereotypes placed upon him do not define his personality or character.

W. H. Beck weaves a steady reveal of clues throughout, and readers will enjoy teasing out the different threads of the mystery as the novel progresses.

Ultimately, Malcolm at Midnight is just as much about identity as it is about adventure, as Malcolm undergoes a steady character transformation to overcome his own self-doubt, and determine, once and for all, the kind of rat he wants to be: a rat of “valor and merit.”

Cleary, Beverly. The Mouse and the Motorcycle. HarperTrophy, 1965.