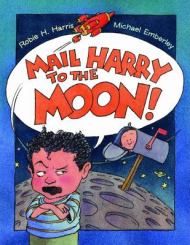 "Before Harry was born, there was ME! Now there's me. And Harry." Pity the poor narrator—beleaguered, disillusioned, ignored, and aggrieved—a former only child for whom life used to be bliss. Harry, a winsome and contented diaper-clad baby, takes an uninvited bite of his big brother's banana; spits up smelly, yucky, cheesy stuff all over him; and, worst of all, has taken over Grandma's lap. The wild-eyed narrator, his fists clenched, black curls akimbo, has had it. "Throw Harry in the trash!" he suggests darkly, and "Flush Harry down the toilet!" and, watching Harry nestle contentedly in Grandma's loving arms, mutters dejectedly, "Put Harry back inside Mommy." After a night of listening to the screaming baby, the enraged boy screams, too: "Mail Harry to the moon!" But when he wakes up in the morning and there's no screaming, babbling, burping Harry, the boy gets worried and starts searching the trash, the toilet, and Mommy's belly. What if Mommy and Daddy really did mail baby Harry to the moon? he worries guiltily. Off he flies to the moon in his laundry basket rocket ship, a metal spaghetti strainer akimbo on his head, to rescue the little tyke.