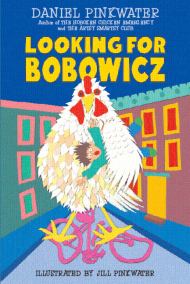 I've been a Pinkwater fan forever. Or at least since the 1970s when he started publishing bizarrely comical children's fiction books like Lizard Music and Fat Men from Space and one near and dear to New Jersey's little heart, The Hoboken Chicken Emergency. Who could forget young Arthur Bobowicz coming home on Thanksgiving, after searching every open grocery in town, without finding a single turkey for his mother to cook for dinner. Instead, he encounters a six foot, 266-pound chicken named Henrietta. "CLUCK!" she says. "Momma, it's a really big chicken," Arthur shouts to his mother from outside their apartment door. That chicken becomes his friend and companion until she escapes, terrorizing the citizens of Hoboken. I still love that book and remarkably, it's still in print.

Fast forward 25 years. In Pinkwater's delightfully weird sequel, Nick Itch has just moved with his parents from their perfectly nice, middle class suburban neighborhood in Happy Valley to urban Hoboken, New Jersey. In the first hour, Nick's bicycle is stolen, perhaps by a caped phantom, a mysterious figure who skulks around town. All right, okay, it was a girl's bike, but it was Nick's and now it's gone. Luckily, he makes two new pals, Bruno Ugg and Loretta Fischetti, kids who love Classic Comics as much as he does. The trio sets out to track down not just his bike, but also Arthur Bobowicz, who must be a pretty old guy of 35 by now, and that gigantic chicken, Henrietta, who has to be out there somewhere.

They find an ally in a public librarian, the wild-haired Starr Lackawanna, who is "crazy as a bat" (and who any New York State librarian will immediately recognize as the lovely and not at all crazy Starr Latronica, from Binghamton, NY). First of all, she lets them know that their Classic Comics are based on REAL CLASSIC BOOKS. And, whoa-get this. When they read the original classics, they find the BOOKS are even better than the COMICS! Who knew?