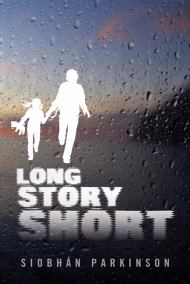 You don’t have to have seen the film, The Crying Game, to know it’s become shorthand for a story with a twist that turns a plot 180 degrees, undermining everything you thought you knew about what was going on. Parkinson, Ireland’s first laureate for children’s literature, uses the same device to great effect here in this taut, unsettling tale of two kids with no good choices before them.

As a narrator, 14-year-old Jonathan turns out to be highly unreliable. As the brother of 8-year-old Julie, however, he is consistently dependable. After their alcoholic mother punches Julie in the face, Jonathan unspools a pack of lies about illness, fearful that if Julie goes to school, “There’d be a social worker on the doorstep by lunchtime.” Having already lost his Gramma, who provided them with hot meals and clean clothes, and his father, who’s left the family, Jonathan is certain of only one thing: He won’t lose Julie, too.

“Why do the social workers take the children away? Why don’t they take the parents?” he asks. “Residential care for trouble parents. That’s brilliant – should enter it in the science fair.”

Days pass with no measurable improvement to Julie’s bruise. It’s possible the cheekbone is broken. Her initial suggestion – “Why don’t we run away?” becomes, seemingly, the only option. An underfinanced, not-well-thought-out plan to find the father who abandoned them ends with the pair in police custody.

At that point, everything changes. The second half of the story will have readers second-guessing the facts Jonathan laid out in the first – he even attempts to have an omniscient narrator tell the rest of the tale. “I thought the third person might make it all seem more real somehow, but it’s hard work writing about yourself as if you are not yourself,” he admits. (Indeed, there’s a clever lesson in creative writing threaded throughout this slim but pulse-pounding novel.)

Though the central mystery is never completely cleared up, the ending imagines that Jonathan’s skills as a storyteller – and the raw material of his life so far – might produce another fine Irish writer, serving up hard truths about what it takes to grow up.