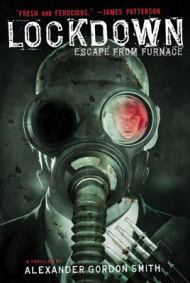 WARNING: If you and your teen reader are squeamish, violence-averse, or are looking for something light-hearted or romantic, please go look elsewhere at ReadKiddoRead for a great book tip. Otherwise, if you – or that teen – can stand a gripping, action-packed, downright scary thriller, well, in that case . . .

Lockdown is a story about criminals and thugs, about monsters and madmen, about a bunch of kids who’ve been thrown into the most terrifying prison ever conceived.

Furnace is a maximum security penitentiary in which kids are sentenced to full life terms. It’s run by a leather-faced, obsidian-eyed warden who bears more than a passing resemblance to Satan, and who employs a small army of shotgun-toting thugs, gasmask-wearing fiends, and mutated dogs to ensure that none of the incarcerated boys even thinks of trying to step out of line, much less tries to escape. (Not that that’s too feasible given that the prison is buried a mile underground in a rocky fissure beneath an armed fortress, entirely cut off from contact with the outside world. The inmates don’t even get mail.)

It’s dark stuff, and our hero, Alex, is no ray of golden sunshine, either. Sure, he – along with many of the boys in Furnace – was framed: he was arrested for a terrible murder he actually didn’t commit. But, even so, he spent much of his pre-Furnace life as a bully, a burglar, and a generally selfish, petty criminal.

In this crucible of darkness, however, Alex becomes a better person. He learns lessons, makes friends, and even finds some measure of redemption as he witnesses horrible acts of violence, death, and – through chapters with titles like “Buried Alive” and “Bloodwatch” (which contains one of the scariest scenes the reviewers have ever read) – finds himself thrust into the role of hero and, perhaps, savior.

Lockdown is the first book in the Escape from Furnace series. Fans of the novel will want to check out Solitary and Death Sentence, Books 2 and 3.

Reviewed by : Bart and Ned Rust, Son and Father