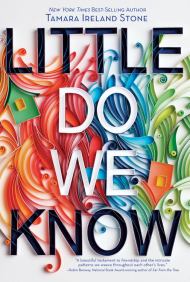 Little Do We Know

Emory and Hannah were lifelong best friends and neighbors, with only 36 steps between their homes. That is, until an intense fight and a troubling secret rips their friendship apart. LITTLE DO WE KNOW alternates chapters between Emory's and Hannah's points of view and piece by piece unwinds what is to be a defining few months in their lives. Author Tamara Ireland Stone weaves faith, first love and, most importantly, the strength of friendship into this stunning novel.

As the story begins, Emory and Hannah are both seniors in high school with the future of college quickly descending upon them, though otherwise their lives couldn't be more different. Emory dreams of being accepted into the UCLA drama program. She is a social butterfly at school and at home only wants to avoid being involved in her mom's upcoming wedding. She's also worried about what the future holds for her relationship with Luke, her boyfriend and true love, when they go to different colleges in the fall. On the other hand, Hannah is the daughter of a preacher and attends the religious high school that her father runs a few towns over. Up until the fight with Emory three months ago, she was a complete believer and her father was her idol. That is, until her future plans are shattered when she finds out her father spent her college fund, and she may not get to go to Boston University as planned. Hannah begins to truly question everything that she once so easily believed and gets involved in a romantic entanglement of her own.

Everyone's world changes, however, when Luke, planning to go to Emory's house rolls up the block and stops in front of Hannah's kitchen window. Hannah, who had woken up to get a glass of water serendipitously sees him unmoving in the car and runs out to help and call an ambulance. Luke had suffered a sports injury, which became more dire, and he has a near death experience, which connects him to Hannah in unexpected ways. This trauma leads Emory, Hannah and Luke to reexamine their beliefs as well as finally come to terms with the heartbreaking event that lead to Emory and Hannah's rift in the first place.

Tamara Ireland Stone tackles difficult issues in this novel and realistically portrays three different teenagers coming of age in an ever-changing world. It sensitively deals with topics like questioning faith, the afterlife, and how to be able to move forward from various harrowing experiences. There is no right answer for every teen, and Stone brilliantly highlights that everyone must forge their own way. Readers will also get swept away in a beautiful love story and believe in the power of friendship when it's needed the most.