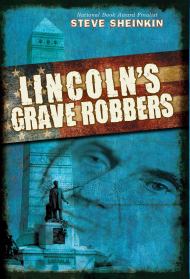 Part thriller, part mystery, and all true, Lincoln’s Grave Robbers reads like an intricately plotted novel told from multiple viewpoints. Although Abraham Lincoln is one of the most written about historical figures for both children and adults, this part of his story is little known; it involves both counterfeiting and the creation of the Secret Service, which early on was not in the business of protecting Presidents, living or dead.

During the Civil War, the United States Treasury began for the first time to print paper money in large quantities, and counterfeiting became a big business since dollars were so easy to copy and print. By the end of the war, fifty percent of the paper money in circulation was counterfeit, and much of it could be traced to one extremely gifted engraver, Ben Boyd. The government responded to the problem by creating the Secret Service, a division of the Treasury originally charged solely with hunting down counterfeiters (coney men, for short) and closing down their operations. When Ben Boyd was finally caught and sent to prison in 1876, the Secret Service considered it a major victory. His absence did indeed significantly cut down on the amount of counterfeit currency in circulation.

Members of Boyd’s gang couldn’t operate without him, so they hatched an elaborate plot to break into Lincoln’s crypt in Springfield, Illinois, steal his body and hold it for ransom, hoping to trade it for Ben Boyd’s freedom. They did extensive background research, hired trustworthy criminal specialists and body snatchers, and had the plan worked out down to the last detail. What they hadn’t counted on was Patrick Tyrrell, the head of Secret Service operations in Chicago. Tyrrell was on to their plot, and he had his own intricate plan to catch them in the act which involved other Secret Service agents, private detectives, and a criminal informant named Lewis C. Swegles, who was also a trusted member of Boyd’s team.

The book opens with a long cast of characters, which will come in handy as a reference, especially as young readers often have trouble keeping track of who is who when a lot of characters are introduced early on. There is also a glossary of phrases at the back of the book, such as “shootin’ iron” (pistol) and “roper” (undercover police informant). The author uses these sorts of phrases throughout the book to give the narrative a flavor of its time.

Only readers know every detail as they see both sides of the story unfold through the actions of the con men and the Secret Service agents who are tracking them. Author Steve Sheinkin offers a gripping story, reconstructed from historical documents, newspaper accounts, court records, and eye witness reports, which will keep both history and thriller fans – and both young readers and adults -- on the edge of their seat.