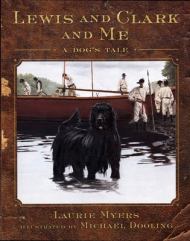 Lewis and Clark and Me

It's been more than two centuries since Meriwether Lewis and William Clark undertook their famed expedition with the Corps of Discovery to chart the lands west of the Mississippi in 1803. They spent two and a half years, journeying 7,000 miles to the Pacific Ocean and back. Along with their 33-member team, Lewis brought along his huge black Newfoundland dog named Seaman. Based on the journals the men kept of their travels, the author has fashioned a charming personal narrative told by Seaman himself, chronicling his adventures along the way. Each of the nine illustrated chapters is based on a quote from Lewis's diary that involved Seaman. At the end of each chapter is an excerpt from one of the actual diaries, describing the event.

Readers will enjoy comparing the differences between the human perspective in Lewis's diary entries and the dog's point of view as Seaman describes his part in each escapade. There was the day he hunted squirrels for the men; the day he almost bled to death after a beaver bit him; and the time he saved the men from a marauding buffalo in camp. Each chapter also sports one handsome, full-page, realistic oil painting by Michael Dooling.

Add two more viewpoints with Joseph Bruchac's compelling historical novel, Sacajawea, narrated by William Clark and Sacajawea in alternating chapters as they relate their experiences to Sacajawea's seven-year-old son, Pomp, who was born en route. To find out more facts about the expedition, readers will be especially intrigued by Rhoda Blumberg's The Incredible Journey of Lewis & Clark.