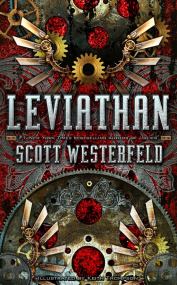 Climb on board the Leviathan, a living airship, and join the action with two teenage heroes as they’re swept up in an alternate universe version of World War I. In this roughly historical take on the Great War, Scott Westerfeld delivers thrilling adventure as he creates an intriguing world of fabricated beasts and monstrous machinations.

This steampunk series – consisting of Leviathan, Behemoth, and Goliath – features a Europe fundamentally divided. The Axis powers of Germany and Austria-Hungary, known as the Clankers, use steely weapons of iron and machinery – think of the Imperial Walkers from The Empire Strikes Back – to wage war. On the other side of the conflict, the Allied forces of Great Britain, France, and Russia, known as the Darwinists, use genetic means to fabricate living beasts – like fléchette bats fashioned to eat and then release metal spikes onto enemies – to fight.

At the book’s outset, Prince Alek, the son of the arch-duke of Austria-Hungary and the secret heir to the empire, flees from his home with a small group of loyal men. They’re on their way to Switzerland, where they’ve set up a safe house (or rather safe castle) to wait out the war. Meanwhile in Great Britain, Deryn, a girl who loves flying, impersonates a boy in order to join the Service, a guise which actually works and lands her as a midshipman on the mighty airbeast, a giant hydrogen-filled whale known as the Leviathan. When the Leviathan crash lands in the Alps of Switzerland, Alek endangers his own life and future empire in order to save the stranded British officers, and the two young heroes come face-to-face.

With secret military missions, harrowing rescues, high-flying adventure, and intriguing mysteries, your kids won’t be able to put down this thrilling book. And as a bonus, Keith Thompson brings Westerfeld’s fantastic imagination to life with incredible illustrations which show off the giant airbeast, many other fabricated beasts, and various Clanker war machines. In a postscript, Westerfeld explains a bit about the history of World War I and where he takes liberties in his version of events. This brief lesson will lead kids to want to know more about the circumstances surrounding the history of World War I as they continue on with the rest of this wonderful series.

Stroud, Jonathan. The Amulet of Samarkand (The Bartimaeus Trilogy). Miramax/Hyperion, 2003.