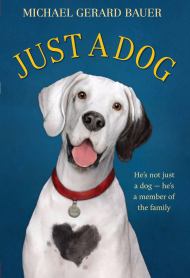 Even kids who don’t love dogs will love this book.  Even if they don’t own a dog, they will want to own this book so that they can read it again and again, and loan it to their friends and persuade their teacher to read it aloud in class.

When Corey was three years old, his family let him choose a puppy from a litter of mixed-breed dogs.  Without hesitation, he picked the puppy that was mostly white.  The name “Mister Mostly” eventually became “Mr. Mosely,” because Corey was too little to be able to say the letter “t.”

Mr. Mosely learned only one trick in his whole life. He never won a prize in a dog show. He didn’t rescue anyone from a burning building.  Still, Mr. Mosely was an absolutely incredible dog.  With his amazing love, loyalty and intuition, he supported every member of his family.  He seemed to know what they needed even when they didn’t know themselves.

Every afternoon, Mr. Mosely sat in front of the house waiting for Corey to walk home from school.  Corey had hilarious times trying to disguise himself and trick Mr. Mosely.  This game was fun for both of them until one afternoon when the trick went disastrously wrong.

Corey narrates the story of Mr. Mosely from his puppy days to how his family managed to deal with Mr. Mosely’s death.  As narrator, he’s completely honest about the good times and the bad times, about what he did right and what he did wrong.  Each chapter, happy or sad, resonates with truth.  Corey and Mr. Mosely could be the boy and his dog next door.

This isn’t a book about a perfect family with a perfect dog. Corey’s dad loses his job.  Money troubles and relationship troubles are part of this story.  Mr. Mosely becomes the unifying force that helps the family cope and keep together, and he will never be “just a dog,” to anyone who hears his story.