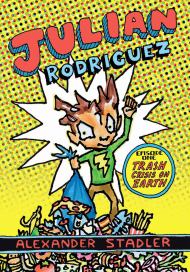 "OUTRAGEOUS! That is the only word that can possibly describe the treatment I have received on this pathetic little planet!" In a hilarious graphic novel-ette, drawn in jumpy black line with light and dark green highlights, meet the wronged narrator, Julian Rodriguez, as he pounds away on his computer keyboard in his bedroom, transmitting messages of complaint to the Mothership. He claims he's been disguised as an Earthling juvenile for eight long years now, and has never complained "despite the mistreatment, deprivation, insults, and disrespect I have endured at the hands of these primitive life forms . . . But this is the last straw!"

Who are these awful earthlings and just what have they done that he finds so utterly humiliating? You'd call them parents, or, as Julian does, Units, and they've done him wrong. The food they pack into his noontime capsule is bad enough, including useless, flavor-deprived woodlike sticks called carrots. Spending the day at Aretha Franklin Elementary taking State Assessment Tests with other "poor little mini-brains" isn't great, either. ("For hours, we were made to fill in small circles with a clumsy stick of wood and graphite.") But then, Evilomami, his Maternal Unit and supervisor of his home study site, assigns him to hard labor, a chore even a lowly apprentoid would never be asked to do. ("Julian? Would you please take out the trash?")

Will readers think Julian is an alien on an undercover mission? It depends on how literal they are. What a tour de force of language and comedy he delivers, especially for kids who've watched Star Wars and Star Trek, who will appreciate the stilted space guy talk. When you read it aloud—and it's a little book, the size of Jennifer L. Holm's Babymouse books—kids will pore over the goofy little drawings of Julian's Earth environment. They'll relish translating his many descriptions of earth objects and customs. Pair this with the classic poem, "Sarah Cynthia Sylvia Stout Would Not Take The Garbage Out" from Shel Silverstein's Where the Sidewalk Ends, which Julian quotes in his rantings.

Benton, Jim. The Fran That Time Forgot. Simon & Schuster, 2005. (And others in the Franny K. Stein, Mad Scientist series.)

Holm, Jennifer L., and Matthew Holm. Babymouse: Our Hero. Random House, 2005. (And others in the Babymouse series.)