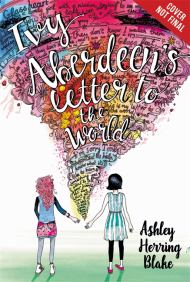 “This is my letter to the world, that never wrote to me…”- Emily Dickinson

IVY ABERDEEN’S LETTER TO THE WORLD starts with a poignant Emily Dickinson quote which is symbolic to the protagonist of the story, but also a reoccurring theme throughout this tender and literary book.

The novel starts with Ivy’s world literally being ripped apart into pieces. A tornado completely destroys her house into rubble and leaves her family with no possessions or home. They are forced to move into the elementary school gym and then eventually all 6 of them into one hotel room, where they have to figure out how to handle their situation. Things are especially tough as Ivy feels ignored by her parents, who need to take care of her new twin baby brothers, and feels tension with her older sister Layla.

To make matters even worse, Ivy’s precious notebook goes missing between the moves. Ivy is an artist and this was a very private journal filled with drawings of girls holding hands with other girls. Soon after, the drawings start to appear page by page in Ivy’s school locker with anonymous notes that she shouldn’t be embarrassed by them. Ivy however is terrified that someone will reveal her secret images before she is ready to even talk about them herself or knows what they mean. She’s not embarrassed, she’s confused about why she never wants to draw a boy in her cherished notebook, and feels herself invisible to the world.

Ashley Herring Blake writes in a pitch-perfect middle-grade voice, sharing the coming of age story of a 12-year-old girl, who is not sure where she fits in anymore with her family or her best friend Taryn, to whom she’s scared to tell her secrets to. Ivy’s struggle is heart-wrenching and impactful. When she meets June, a free-spirited girl in school, and starts to develop feelings for her that may extend past friendship, readers go on this journey of self-discovery with her. The writing is charming and sensitively discusses not only a first crush, but the pain of not knowing your own identity. The story ends hopeful as Ivy learns about the power of friendship, family and being true to oneself. This should be a book handed to every pre-teen as they will be able to relate to the complexities of moving from childhood to becoming a teenager and carving out their own place in the world.