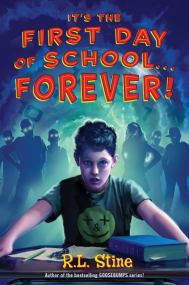 It's the First Day of School... Forever!

It’s not every eleven-year-old who can survive maple syrup squirted into his hair; puddle-splashes leaving spots in indiscrete places on his pants; his dog following him to school and then attacking the principal; and a mishap – no two, make that three – that injures the most popular boy at school.  And that’s before the bell rings.  Later he gets lost in the endless hallways; kills the teacher’s rare and expensive classroom pet scorpion; and discovers gravestones and one seriously weird bookroom attendant in the spooky basement.  All in one day – the first day of sixth grade in his brand new school – Ardmore Middle School.  But somehow, Artie Howard makes it through.

Could it get worse?  Yes! When Artie wakes the next morning for the second day of school, the events of the previous day begin repeating.  He is determined to stop them and begs his mother for help when his younger brother squirts maple syrup into his hair again. This time, she just assures him that “it’s only syrup.”

“No, no.  You don’t understand… My dream.  The horrible nightmare I had about my first day of school. I think it’s coming true!” Artie exclaims.

And Artie’s right. His second first day is more terrifying than the first first day.  The “accidents” multiply and intensify.  And though he tries to interrupt the pattern of events, he is unable to change things.  Somehow he makes it through his second first day, and when he wakes up it’s finally the third day.  Or is it?

In very short, action-filled chapters, Artie tells his own story, tapping into every kid’s fears and worries about new schools and the beginning of new school years.  Artie’s keep-on-going attitude and his ability to find bits of humor in it all will have readers on his side.  The genuinely scary encounters in Ardmore’s basement will get kids racing through the pages.  And the surprising twist in the end provides the just right explanation for it all.