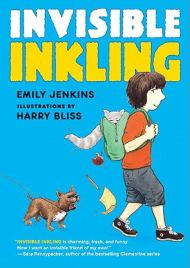 Hank will start fourth grade without his best friend whose family has just moved to Iowa City. Older sister, Nadia, doesn’t have time for Hank: she’s studying for the PSATs and texting her boyfriend.

Then, reaching beneath the store’s sink to retrieve an errant Lego piece, Hank finds something that feels furry, but which he can’t see. Later, he saves this same invisible (but not imaginary) furry thing from Rootbeer, a neighborhood dog that Nadia is paid to take for walks. Hank’s heroic rescue forces Inkling, the invisible creature, to reveal itself. “It was life or death with that rootbeer,” says Inkling, who thinks “rootbeer” is a species, not the dog’s name. “I’m in your debt until I can return the favor. Bandapats have a code of honor.”

If only it were always this easy to find a new best friend!

Inkling takes up residence in Hank’s laundry basket and bit by bit provides his backstory.  Bandapats (an animal so rare it appears only in this book) are native to the Peruvian Woods of Mystery (or maybe it’s the Mexican outback. Inkling’s a pretty unreliable narrator of his own biography.) He’s trekked all the way to Brooklyn on the faulty assumption that Hank’s store, The Big Round Pumpkin, would be a hot bed of squash consumption, rather than ice cream. Squash is a staple of the bandapat diet, and Inkling is in desperate need of some.

Hank, however, has bigger problems. Fourth grade has not started smoothly. Specifically, he’s caught the attention of the class bully, who demands his lunch each day and makes Hank’s life miserable. Now more than ever, Hank needs a true friend – and a crafty ally.

Jenkins has written a story about  the real-life problems kids face as they navigate their way through grade school, but added an element so funny, a reader might forget the considerable miseries Hank has to overcome. The only problem is now every kid’s going to want a bandapat like Inkling, a sassy sidekick with his heart in the right place.