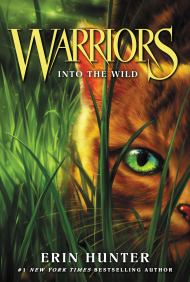 Warriors #1: into the Wild

This fierce and engaging series introduces a world of wild, brave cats fighting for survival. Clans of cats roam forests and marshlands, battling enemy clans for control over their scarce prey.

When Rusty, a kittypet, owned by a pair of Twolegs and living on bland kitty food, ventures into the neighboring forest, his whole life changes. A young tomcat named Graypaw emerges from nowhere and pounces on the intruder. Though only a soft kittypet, Rusty fights bravely, using his wits more than his strength, and gets a few scratches in. Leaders of a tribe of cats called ThunderClan are watching, and when both cats calm down, they invite Rusty to join their clan and train to become a warrior.

Rusty proves himself to the unconvinced cats back at the Clan by challenging a jeering cat who makes fun of his collar, and Rusty is renamed Firepaw. He is about to undergo vicious training and feel the freedom of catching his own mice and relying on a new, wild family.

In the spirit of Watership Down, the desperate battle scenes between wild animals give Warriors an action-packed pace that has made this prolific series so collectible. The books bring about an appealing idea: cats, or animals in general, must perceive their surroundings much differently than we humans do. For these cats, they must control their territory and claim their rightful food. They know how to sniff the air and know exactly what’s behind what brush, a skill Firepaw has to learn to develop. When the rivalry between ThunderClan and RiverClan becomes more serious, Firepaw must learn quickly in order to save the rest of his new family, as well as challenge some of their old ways.

The Seekers series follows several polar bears, brown bears, and bears raised in a zoo. Kids will be just as eager to get to know these characters in their separate travels and similar troubles of learning to survive in the wild.