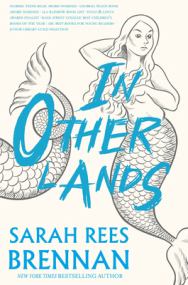 Elliot is a wild-haired, red-headed, thirteen-year-old boy whose life changes forever when he spots a wall in an open field during a class field trip. It turns out most humans can’t see the wall, but those who can are able to cross it and enter the magical realm known as The Otherlands. This world is filled with dwarves, elves, harpies, trolls and mermaids and even though technology from Elliot’s world doesn’t work there, he is immediately captivated by everything about it.

One of the first creatures Elliot meets is a beautiful elf girl named Serene-Heart-on-the-Chaos-of-Battle who Elliot is determined to win the affection of. But wooing Serene means putting up with her friend Luke Sunborn, the spoiled yet annoyingly likeable son of the most powerful and revered humans in The Otherlands. Luke is a talented fighter—he can swing swords, throw punches, and shoot arrows like a pro. Elliot, an intelligent pacifist, has no interest in violence, and pursues Council training, where he learns to write peace treaties, instead. Serene, who was raised in the elven society where women are seen as the superior sex, studies both, and Luke and Elliot enter a truce to support her as best they can.

IN OTHER LANDS follows Elliot, Luke, and Serene from ages thirteen to seventeen as they make their way through five years of school in The Otherlands.  Elliot makes a unique and fantastic narrator as he is a sarcastic loud mouth who airs all of his opinions in the open. He doesn’t just think he’s smarter than all of the other kids his age, he knows it and he isn’t afraid to say it out loud. There’s more to Elliot than the hard exterior he shows people, though. Elliot’s mother abandoned him as a baby, his father has always been cold to him, and making friends has never been easy for him. Seeing him struggle with his personal relationships, especially with Luke who has been loved by everyone his whole life, is part of what makes this book so fantastic.

This is a long book that covers five years in great detail. Despite all of the fantasy elements, this is a character-driven story that focuses intensely on three friends as they grow and change over time. The book covers a range of complex themes including war, gender roles, sexuality, identity, and xenophobia. Readers will get very attached to the characters, and will be screaming, laughing, and crying throughout the four-hundred-plus pages. Not a lot of stories go as deep as IN OTHER LANDS, so it is a must-read for any fan books that make you feel.