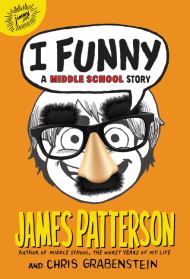 Jamie Grimm talks right to readers – his honesty and his humor making full impact on each of us -- putting us firmly in his fan club.  A good place to be.  Not just because Jamie Grimm is one of the most entertaining and likable characters you’ll ever meet in a book; not just because he sees the humor in the world around him and points it out to us so we see it, too; mostly because he’s a terrific kid, facing a lot of tough stuff, and he needs us rooting for him, even though he’d never ask!

Jamie wants to be a stand-up comic. (And, yes, he does see the humor in this, since he is in a wheelchair.) Still, he is determined, and he’s studied jokes from the best.  He’s got a million ‘em, and he’s always working on his delivery -- practicing in school, with friends, and at the cash register of Uncle Frankie’s “Good Eats by the Sea” diner. He cracks the customers up -- good for diner business, good for Jamie’s self-confidence, and great for readers.

Beyond the joke-telling, Jamie’s sense of humor pulls him through the hard times he’s facing.  He’s new in town. (“I only came to Long Beach this past summer.  Before that I lived in Cornwall, New York, where life was definitely good.”)  He is new at his middle school (where his new friends convince him to run for student council; “That made me feel pretty good, actually.  For like, four hours.  Until the announcements at the end of the day. … I got three votes.  Three out of three hundred sixty–one.”). He has been adopted by his mother’s sister (“we’ll call her Aunt Smiley”), sleeps in the garage (“Uncle Smiley cleaned the place out.  He even put rugs over all the oil and antifreeze splotches on the floor. The cold concrete floor”). His adoptive big brother, Stevie Kosgrove is his nemesis – who belittles, beats up, and bullies Jamie every chance he gets.

As kids read this novel, they’ll wonder why Jamie’s moved to Long Beach, what happened to his family, and why he is in a wheelchair.  We get the answers well into the book, when Jamie trusts Cool Girl – Suzie Orolvsky -- with the story.  Uncle Frank convinces Jamie to enter “The Planet’s Funniest Kid Comic Contest,” and this becomes the engine of the novel, leading Jamie and his friends and foes from level to level of the contest, with readers eagerly following and cheering.

Hilarious throughout and tender in turns, I Funny offers kids a reading experience that will be enjoyed all the way and then warmly remembered.

From Audrey, a young reader:

"This is an amazing book. I really enjoy a good laugh, and this book gave me a lot of them. I like that Jamie is my age and is pursuing his dream to be a comedian. I enjoyed reading all of the jokes and telling them to all of my friends and family. I love this book and hope that others agree."