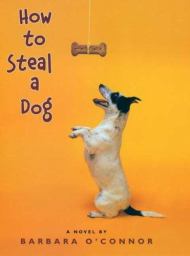 Sometimes you pick up a book and it just says, “Read me.” This one has an irresistible cover, a compelling title, and a most unexpected first line that will hook readers and keep them riveted: “The day I decided to steal a dog was the same day my best friend, Luanne Godfrey, found out I lived in a car.” Georgina’s father has bolted, leaving the family with nothing; the landlord has kicked them out of their apartment; and Mama is working two jobs. Georgina and her little brother Toby have been sleeping in the back seat of the Chevrolet for a week now, washing up in the gas station each morning. Then Georgina sees a sign, tacked up on a telephone pole: “Reward. $500. Have you seen me? My name is Mitsy.” Who would pay so much money for a lost dog? Mama says $500 would be enough for them to get a place to live. That’s when Georgina comes up with a plan to find a dog someone loves so much, they’d pay $500 to get it back. Half of her thinks, “Georgina, don’t do this. Stealing a dog is just plain wrong.” But the other half thinks, “Georgina, you’re in a bad fix, and you got to do whatever it takes to get yourself out of it.” And so, she finds herself a dog, recording in her notebook lists and rules and steps she will need to carry out her plan.

What a gripping and thought provoking moral dilemma readers face here. They’ll ache for Georgina to be able to lead a normal life again, but at what expense? How do you root for a character who is about to do something terrible? Still, they will empathize with her as they ponder and discuss, What would I do if this happened to me?