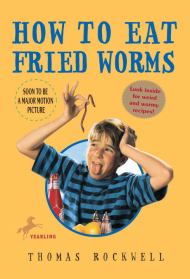 Billy's friends Tom and Alan bet Billy fifty dollars that he can't eat fifteen worms.  Billy's going to need all the discipline and will-power he can muster if he has any chance to succeed.

It's not an easy bet for Billy: at one point he has a terrifying nightmare that he is in a fancy restaurant eating deluxe, filet mignon-caliber worms (not the regular old night crawlers that Alan and Tom serve up for him).  Yet after Billy "ate and ate and ate and ate," from a "mammoth coil" from which "steaming pink juice flooded out," he looks down and discovers, "two more of the huge worms wound around and around his ankles."  Billy then looks at his own arm and discovers "another worm wound around his arm, glaring hungrily at him with his bloodshot eyes..."

Billy's nightmare is typical of Rockwell's focus on the grosser-and sure to please young-reader-aspects of the premise of How To Eat Fried Worms. Billy works to prove his masculinity to frenemies Alan and Tom, and, as much as parents might object to a story this violent and obsessed with the details of its own grossness, most boys and many girls will identify with it.

Chapters entitled "The First Worm," "The Second Worm," and so on are interspersed with chapters like "The Pain and the Blood and the Gore," "Red Crash Helmets and White Jump Suits," "Pearl Harbor," and others. There is no mention of World War II in the "Pearl Harbor" chapter, but Rockwell invokes it for good reason: How to Eat Fried Worms is about the psychological warfare that young people wage when they are still in the process of proving who they are.