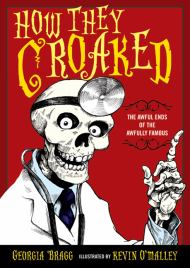 Readers with a taste for the gross and grotesque will find How They Croaked, a consistently disgusting, gleefully ghoulish chronicle of the gruesome deaths of nineteen famous people, irresistible. Georgia Bragg opens with King Tut, discussing, in gory specifics, the embalming and mummification processes of the ancient Egyptians. Among the many macabre details is an explanation for why mummy eye sockets look empty: "Eyeballs shrink to almost nothing during the drying process." Bragg notes that if mummy eyeballs are rehydrated, they return to almost normal size.

Among the other famous figures profiled are Henry VIII, whose corpse exploded in its coffin while lying in state; George Washington, who was drained of 80 ounces of his blood by doctors before dying; and Marie Curie, who did herself in with constant radiation exposure. The accounts of how people ill or injured were treated by doctors through the 18th century reveal that medical practices were usually more lethal than the maladies. Between each chapter is a page or two of related, gross facts revealing, for example, the bizarre fates of Einstein's brain and Galileo's fingers and the outrageous things coroners keep as souvenirs. Charles Darwin was known to be fanatically scrupulous in keeping his personal health records, but it's hard to believe he really puked four million times.

Georgia Bragg's informal, conversational style and Kevin O'Malley's cartoon illustrations are complementary to the flippant approach to the subject. An engaging, informative, and downright disgusting book that is sure to leave readers thoroughly entertained and totally grossed out.

Schwartz, Alvin. Scary Stories to Tell in the Dark. Harpercollins, 1986.