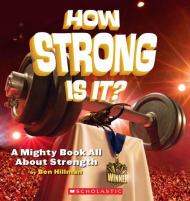 How Strong Is It?

Astonishing facts abound in this eye-popping look at 22 of the strongest animals, substances, and elements on earth, including the Komatsu D575A, the strongest bulldozer in the world, and the stickiest glue on earth, made by Caulobacter crescentus, a type of bacteria found in water pipes. For each breezy but fact-filled written description, there's an accompanying double-page oversized color photograph that will make you do a double take. For instance, what stringlike substance is stronger, ounce for ounce than nylon, steel, or even Kevlar, the world's strongest synthetic fiber? That would be spider silk. "If a spider could make a web where each silk strand was as thick as a pencil, its web could stop a Boeing 747 in midflight." It's one thing to read that fact, but seeing the accompanying computer manipulated photograph of a plane in flight with its nose stuck in a massive spider web moves it way higher on the cool meter.

Start out by asking listeners to list the strongest things they know, including the strongest animal, pound for pound—which turns out to be mightier than a gorilla, the elephant, and even the blue whale. (Spoiler Alert: It's the Hercules beetle!) The facts come fast and fun in Hillman's entertaining approach to superlatives, including the companion books How Big Is It? and How Fast Is It?.