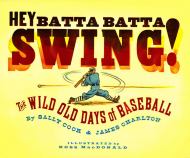 What was the game of baseball like when it began, more than a century ago? First off, back then, you could get a runner out by soaking him. What’s that? First, examine the old-timey yellow and red watercolor and pencil-crayon cartoon illustration on the second page, and you’ll see a guy beaning a runner in the head with a ball. Now, look in the lower left margin, and you’ll find a definition for soaking: “a very early rule that allowed a runner who was off base to be put out by hitting him with a ball.” Ouch. The entertaining array of baseball facts will surprise even the biggest baseball fans (or cranks, as they were called in the 1880s). Speaking of fans, according to another definition in the book, one theory is that the term “fan” was shortened from “fanatics” Mirthful illustrations on every page illuminate stories about team colors and names, players’ numbers and nicknames, cheating and cheaters. Readers will love having the glossary right there in the margins where they can find out fast the difference between, say, a meatball, a gopher ball, and a lollipop.

Readers can compare and contrast baseball behavior then and now. Meet some memorable players in picture book biographies of Lou Gehrig, Satchel Paige, and Babe Ruth, listed below. Another masterful baseball book is Kadir Nelson’s We Are the Ship: The Story of Negro League Baseball. For more old-timey fun, read aloud a version of Ernest Lawrence Thayer's classic narrative poem, “Casey at the Bat.” Many children have never heard the poem or even heard of it. Here’s a classic sentence they’ll add to their lives: “But there is no joy in Mudville—mighty Casey has struck out.” Once they’ve heard the original, they’ll enjoy and get Dan Gutman's tongue-in-cheek rhyming sequel, Casey Back at Bat. And finally, play some ball with your kids, sure, but also introduce them to the daily sports pages of the newspaper, and take them to a real game, even if it’s just the local high school team.