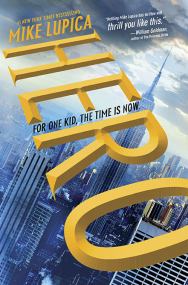 Is there any boy who hasn’t imagined himself as a superhero?  Or wished that his dad had superpowers?

Here is the novel to give to a boy, ages 8-12, who wants a change of pace: a book that’s exciting, fast-paced, and imaginative and not about sports or wizards. Fourteen- year-old Zach Harriman knows he has a pretty amazing dad.  He accepts that his dad’s job as a government agent with a high security clearance means that Zachary must be kept in the dark about much of what he does.  When Zach’s father dies in an airplane crash, Zach starts to learn just how many secrets his dad really had, including his super-hero powers.  What is more surprising to Zach is that these powers are hereditary!  Not only that, but with his father gone now Zach is the only hope for protecting the President of the US from immanent threats.  Zach must pick up where his father left off, while learning about his powers, and putting together the pieces of his father’s secretive life as a superhero.

Was anything ever what it seemed?  Who can he really trust? ‘Uncle Jon’ his father’s best friend?  Or the mysterious old man he meets while investigating the plane crash?  Can he even trust his mother and his own friends?  Each step Zach takes, results in more questions rather than any answers.  He must conquer his fears, his grief, and control his new powers to save the President and protect his loved ones.

Hero is a page-turner for sure. The dialogue and references all are very current and will help put any reluctant reader at ease.  And its great message, uplifting story, and fresh writing style will have boys cheering!