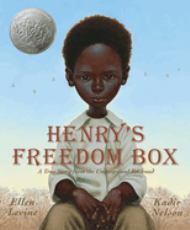 The first page of this eloquent picture book will stun readers and listeners of all ages. Look at the handsome full-page painting of a somber young African American boy, barefoot, sitting on an upturned wooden barrel, his back against a brick wall. The text on the facing page states, simply, “Henry Brown wasn’t sure how old he was. Henry was a slave. And slaves weren’t allowed to know their birthdays.” On his deathbed, the master gives Henry over to his son to work in his tobacco factory. Henry later marries a woman named Nancy and they have three children. After his wife and children are sold at the slave market, the grieving man makes a bold plan to free himself. He asks his friend James and Dr. Smith, a white abolitionist, to help pack him into a large wooden crate. They mail him from Richmond, Virginia to the doctor's friend in Philadelphia, 350 miles away. This dramatic story is all the more astounding because it is, essentially, true. After 27 hours of travel in the crate, some of it upside down, Henry "Box" Brown arrived in Philadelphia safe and sound on March 30, 1849, and became famous in the U.S. and abroad as the first person to successfully mail himself to freedom. Kadir Nelson’s unforgettable paintings, which won him a Caldecott Honor, are breathtaking, heartbreaking, and ultimately, hopeful.

It’s not easy to explain the reality of slavery to children of all ages, but this book does it with eloquence and heart. There's a chapter about Henry Brown in Virginia Hamilton's history book, Many Thousand Gone: African Americans from Slavery to Freedom. Also share Emily Arnold McCully's eye-opening picture book, The Escape of Oney Judge: Martha Washington’s Slave Finds Freedom.