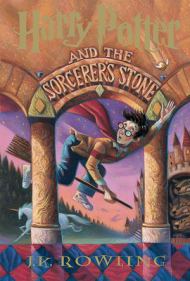 Harry Potter and the Sorcerer's Stone

This past decade, we have been blessed with the Harry Potter effect, and that fantastical boy wizard is still casting his dazzling spell across the Earth. What is it about Harry Potter that has worked its way into the lives and psyches of readers worldwide? There have been many good books about orphans or children in survival mode, and plenty others about wizards and fantastical creatures. Somehow, Rowling touched a nerve, and we are grateful she did. Harry is the catalyst and hero who has brought the power of reading to us all—including children, who were afraid of 500-page books and now demand them; grownups who thought children's books were only for children; and an increasingly anti-literary society that prefers its news and entertainment in short, simple sound bites.

The first book sets the stage. For ten miserable years, Harry has been raised by his dreadful aunt and uncle, the Dursleys, and tormented by their spoiled and cloddish son, Dudley. Magical, inexplicable things always happen to Harry; he is frequently banished to the dank cupboard under the stairs where he sleeps with the spiders. On Harry's tenth birthday, a giant named Hagrid bursts through the Dursley's door and tells him the truth: Harry's parents were great wizards, killed by an evil wizard named Voldemort. And now Harry's being summoned to attend the prestigious Hogwarts School of Witchcraft and Wizardry, as he has inherited his parents' marvelous powers. Harry and his new school pals must gear up for battle with the Dark Side, in a school filled with secret passageways and doors, teachers who are ghosts or witches or wizards, and a potions professor who seems to have it in for Harry. Listeners will thrive on the vicarious adventure and good humor of this crackling and complex high fantasy novel and its six sequels, one for each year Harry spends at Hogwarts.

Old and new fans alike will want to look at these spectacular websites: www.jkrowling.com and www.scholastic.com/harrypotter. We now need to build on that gift J. K. Rowling has bestowed upon us, that rekindling of a love of reading, with an ever-diverse immersion into other great books.