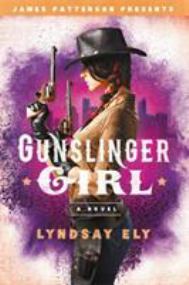 There is perhaps no genre that is more underrepresented in YA fiction than the Western, once a singularly American staple of the literary canon. So the arrival of Serendipity Jones, the titular gunslinger of Ely’s debut novel, is worth noting for sure. Pity, as she’s unfortunately called, certainly cuts a bodacious figure on the cover – holster slung low over tight-fitting jeans, leather Stetson shading her eyes, guns drawn.

But Pity’s Wild West is not one you’d recognize. A Second Civil War has transformed what was presumably once America into something called the Confederacy of North America, which consists of some communes, some territories, and at least one region -- out west -- known for its licentiousness: Cessation.

The only daughter and oldest child in a motherless family of three, Pity is about to married off against her will by her abusive father when she and a girlfriend, Finn, instead decide to make their escape. Besides the clothes on her back, Pity takes only two things from home: her dead mother’s six-shooters.  She remembers her mother fondly even if the memory is pockmarked by the woman’s tragic demise, falling to her death while drunk. Pity has inherited her mother’s aim but not, thank goodness, her demons.

Like Thelma and Louise, Pity and Finn don’t have a real idea where they are going when they leave, and like Thelma and Louise, they run into trouble immediately.  Guns are involved, including Pity’s pistols. After only one night on the road, there’s only one girl left, and though people headed to Cessation rescue Pity, she is wracked by guilt at her role in Finn’s death.

She does not find peace in Cessation (think Vegas before neon), a hedonistic outpost run with a velvet-covered fist by the imperious Miss Selene, and populated with goodhearted concubines, sword swallowers, acrobats, and at least one snake charmer. Somewhat improbably it is decided that Pity’s sharpshooting skills can be turned into an act, a decision that makes more sense when she herself witnesses the Theatre Vespertine’s first performance, a show with a finale that really is a finale for a thief who stole from Miss Selene.

Despite deep reservations about her abilities as a performer -- and her understandable queasiness about the death penalty as public entertainment -- Pity finds a home in Cessation, befriended by the other performers, including the mysterious (and hunky) costume designer, Max.  Happiness doesn’t last long though as Pity is drawn into political intrigue involving Miss Selene and a shady out-of-towner with designs on the CONA presidency. Ely has enough plot in this first novel for about three books, but part of the fun of the latter half of the story is figuring out who’s zooming whom.

As a Western, guns are central to this story; some readers will find a story with gun violence at its center disturbing.

The Cruel Prince by Holly Black

Honor Among Thieves by Rachel Caine and Anne Aguirre

Children of Blood and Bone by Tomi Adeyemi