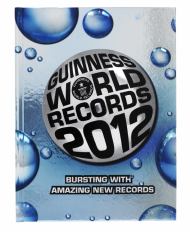 Longest snowmobile journey? Largest monkey? Most valuable guitar? Longest fingernails? (The record holder, Lee Redmond, has fingernails 28 feet, 4.5 inches long, and they're still growing strong.) Who publishes the best collection of superlatives year after year? Only one name is on the tip of everyone's tongue, no matter how long that tongue may be, and it's Guinness. Each annual edition publishes the world's newest or updated records, and the 2009 edition comes complete with 3D glasses for viewing some of the book's photos.

The series began in Britain in 1954, when an executive from the Guinness Brewery entered a debate on what the fastest game bird in Europe was, the koshin golden plover or the grouse. When he couldn't find any reference books on the matter (startling!), he saw the need for a list-an extended record of various records. The book became an instant hit.

Boys especially will pore over these pages of fun facts, from silly to serious. The websitewww.guinnessworldrecords.com asks people to submit their own records for review, and you can even invite a judge to come to a record attempt event.