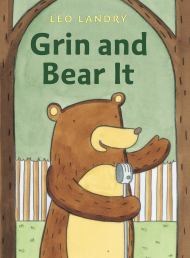 What do you get when a bear walks through your vegetable garden?
SQUASH.
Of course!

Bear wants to be a stand-up comic and tell jokes that make his friends laugh. And he's got a million of 'em.  Bear has a plan, too. He writes his jokes, practices them in front of the mirror and gets himself booked at the Woodland Stage.  But there's a world of difference between telling jokes to his mirror and standing on stage before an audience.  Poor Bear suffers from stage fright and runs away from his debut performance defeated.

When Emmy, a hummingbird, and a comedian by profession, finds Bear's jokes on a crumpled piece of paper, she declares them "brilliant" and makes a deal with Bear: he will write the material, and Emmy will perform.  He might have to expand his material, but Bear's flexible:

Why do hummingbirds hum?
BECAUSE THEY DON'T KNOW THE WORDS.

Bear's jokes are sure to tickle the funny bones of new readers who will surely understand and sympathize with Bear's predicament and cheer the happy resolution.  You, too, will cheer for giving your kiddos who are new to reading a book they can read successfully on their own.