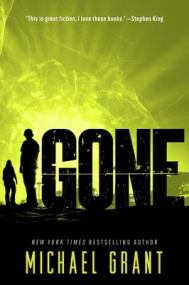 This bestselling science fiction series by Michael Grant follows a small town of children and teens in southern California after everyone over the age of fifteen disappears, along with the internet, telephone lines, and electricity. A mysterious barrier forms around the town with no way for anyone to cross it in either direction. Suddenly, the teens in the town must not only learn how to keep themselves and the younger children alive without adult supervision, but also grapple with the other mysterious and sinister forces at play.

Over the course of the series, readers will watch the characters battle problems both natural— internal division, famine, violence— and supernatural— superhuman abilities, spontaneous mutations, and a larger-than-life villain called the Darkness. Beyond the formidable, otherworldly circumstances and propulsive adventure plot that drive most young adult dystopian novels, the series is at its heart a compelling coming-of-age story. Readers watch these children and teens grow up and out of their previous social roles, and ultimately, find their places within this new and strange world.

Be warned: this series does include a lot of mature and often challenging content. The children are at times on the brink of famine, and the physical and bodily effects of starvation and dehydration are described at length. During the worst moments in the series, these hardships lead to cannibalism among a few of the characters. There is also gang-style violence that occurs between the older teens that sometimes involves weapons, and other times is propagated by the supernatural abilities a few of the central characters develop.

Ultimately, this series uses the backdrop of impossible challenges to tackle themes such as peer pressure, social division, power, and the nuances of good and evil in our society.

“Extraordinarily skillful pacing, which leaves the reader constantly on the verge of a new discovery.” (KLIATT)

“If Stephen King had written Lord of the Flies, it might have been a little like this novel.” (Voice of Youth Advocates (VOYA) (starred review))