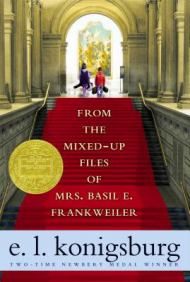 “Claudia knew that she could never pull off the old-fashioned kind of running away . . . Therefore, she decided that her leaving home would not be just running from somewhere but would be running to somewhere. To a large place, a comfortable place, an indoor place, and preferably a beautiful place. And that’s why she decided upon the Metropolitan Museum of Art in New York City.”

Bored with the sameness of her life, eleven-year-old Claudia Kinkaid has planned her adventure with forethought. She chooses Jamie, nine, the second youngest of her three little brothers because he’s such a pennypincher, saving all of his allowance each week. She depends on him to handle the expenses of taking the train from their home in Connecticut, meals, and other essentials. That Wednesday, the two pack their instrument cases with clothes and clean underwear, take the train from Greenwich, Connecticut to Grand Central Station, and hike uptown to the museum. Their whole art-filled adventure is described in vivid detail by Mrs. Basil E. Frankweiler, as written in a document addressed to her stodgy lawyer, Saxonberg.

Each day the siblings explore a different area of the museum. (There’s a two-page map in the book, so readers can follow their path.) Each night at five p.m., closing time, they go into the bathrooms and stand on a toilet seat so the guards won’t see them when they come in to check that everyone’s gone. They sleep in an ornately carved 16th century canopy bed, eat at the nearby Automat on 5th Avenue (which doesn’t exist anymore, sadly) and at the museum snack bar, and bathe in the museum’s fountain, where they augment their cash reserves by collecting some of the change that people have tossed to the bottom.

On their second day at the museum, in the Renaissance Hall, they find the Angel, the most beautiful little statue Claudia has ever seen. It’s a new acquisition from the private collection of Mrs. Basil E. Frankweiler. There’s a mystery surrounding the statue. Could it have been sculpted by Michelangelo? The experts are debating that point, but Claudia and Jamie decide to undertake  their own investigation. When they find a possible clue, they next head out to a logical place to do some research—the New York Public Library.

The premise of two enterprising kids plotting their escape to New York City with no grownups making the rules is what has kept this Newbery Award book so fresh and alluring for readers over the past 40+ years. What’s changed in all this time? Back in 1967 when the book was published, the Met was free. These days, with the suggested admission price at $20, you won’t need to worry about your kids following in Claudia and Jamie’s path. As a parent, you’ll wonder how the parents must have felt to find their children gone for a week (even though they left them a note telling them not to worry . . .), but this is a child-focused book, written in simpler days before Amber Alerts and the 24-hour news cycle would have splashed their pictures everywhere.

Revisit the Met with Percy Jackson in a facedown with his math teacher Mrs. Dodds in The Lightning Thief by Rick Riordan and with James Pompaday and his new friend, Marvin the beetle, as they thwart a perfect crime, an art heist at the museum in Masterpiece by Elise Broach. Also explore the Met’s website at www.metmuseum.org. While there’s no web tour of the museums sights, you can get a real feeling for the majesty of the place in the wordless picture book You Can't Take a Balloon into the Metropolitan Museum by Jacqueline Preiss Weitzman.