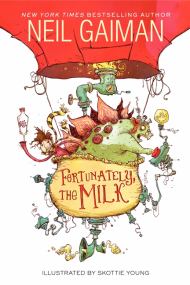 Did you know that sometimes, the strangest things can happen just by stepping outside your own house to pick up some milk? In “Fortunately, the Milk,” the latest offering from the ever-fertile mind of Newbery Award-winning author Neil Gaiman (TheGraveyard Book), the consequences of leaving Dad in charge of the milk-buying while Mom is away have never been wackier or, for that matter, more hilarious.

This wild adventure story opens with Dad newly in charge of his two children. Mum heads out of town to present a paper on lizards… but only after making absolutely certain that Dad knows exactly what needs to happen while she’s away (don’t forget Saturday’s orchestra practice; do not use the upstairs toilet until the plumber comes; feed the goldfish, and other household related duties.) Her important parting reminder: pick up some milk soon, as they’re nearly out. The Milk Problem becomes readily apparent when, on the second morning of Mum’s absence, the kids inform Dad that their Toastio cereal simply can’t  be eaten dry. When it dawns on Dad that no milk for cereal also means there’s no milk for his morning tea, he springs into action, announcing that he will walk down to the corner shop to get some. What could possibly go wrong? In the hands of a master storyteller like Gaiman, the answer is, invariably, plenty.

As it turns out, Dad is gone for what feels like “ages and ages” on his dairy-deficit trek… but when he finally returns with a bang at the front door, he’s armed not only with the aforementioned milk, but also with an Explanation For the Ages. He promptly tells the kids that after buying the milk and saying “a brief hello to Mister Ronson from over the road,” he was abducted by some aliens on his way home. Green, globby, grumpy aliens, that is, with an agenda that involves redecorating the world with pink flamingos (in addition to other tacky home décor items.) As you might imagine, this is just the tip of Dad’s storytelling iceberg. He proceeds to spin the tallest of space-time continuum tales for his slightly skeptical, slightly stunned children – a tale involving an irate Queen of the Pirates; a time-travelling, balloon-piloting Stegosaurus with academic credentials who rescues him just in time; some grouchy, milk-worshipping natives with a volcano god named Splod; funny-accented wumpires; and a Galactic Police squad of space-bike-riding dinosaurs. Spoiler alert: is it any surprise that the milk ends up saving the day, as well as fate of the universe?

“Fortunately, the Milk” is Gaiman at his time-bending, Douglas Adams-esque best, and readers who enjoy fast-paced action alongside a heavy dose of humor are sure to enjoy its nutty twists and turns. Older fans of Gaiman’s Doctor Who and other sci-fi writing will also appreciate a certain “time-wimey,” tongue-in-cheek playfulness that infuses the action and renders the story imminently readable on both kid and adult levels. Adult fans of the film The Usual Suspects will also surely appreciate Dad’s knack for weaving the kitchen’s hot-air balloon calendar, his son’s plastic dinosaurs, and his daughter’s vampire books into the narrative – a sly trick we discover only as the tale draws to its inevitable close. Do we really believe Dad’s epic tale? That’s for the reader to decide.

As a writer, Gaiman clearly revels in the joy and flexibility of language, including the fun that comes from sometimes making up your own words (grundledorfer, anyone?) This results in a tale that begs to be shared and read aloud. Illustrator Skottie Young’s fantastically wacky illustrations are used to great effect throughout and enhance the action on nearly every page, immediately calling to mind the manic energy of Tim Burton’s line art and Seuss’s delightfully off-kilter landscapes. With its clever layout, visual jokes, and typographic acrobatics, “Fortunately, the Milk” is the perfect book to give to readers who are fans of comics and graphic stories, as well as those who gravitate towards the creativity of Roald Dahl and the joyful unpredictability found in classics such as The Phantom Tollbooth. Fortunately for all of us (dairy products included), Neil Gaiman continues to prove with “Fortunately, the Milk” that he continues to be up to the challenge of writing engaging, imaginative books that are enjoyable for both kids and adults.