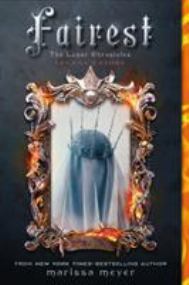 FAIREST is novel 3.5 in Marissa Meyer’s THE LUNAR CHRONICLES series and acts as a prequel to CINDER. The short series installment centers on Levana, the series’ main antagonist. It takes place years before the events of CINDER, when Levana was a teenager and young adult. This book dives deep into Levana’s character, emotions, history, motivations and mindset, and thus enhances the other books in the series.

Readers learn quickly that Levana didn’t have the happiest childhood. She was very privileged to be a princess, but her parents rarely interacted with her, and her older sister, Channary, was cruel to her. The only light that she had was Evret, a royal guard who she felt was the only person in her life who had shown her true kindness.

FAIREST spends a lot of time with the toxic relationship between Levana and Evret. Levana is controlling and manipulative, even as a teenager. It is an interesting dynamic because Evret fears for what will happen to him and his daughter if he doesn’t do what Levana wants. The soft, romantic, emotional side of Levana is something readers don’t get to see in the main series installments, so it is fascinating to read.

In addition to the romance, FAIREST sets up all of the politics that lead to the events of CINDER. A lot of questions you may have after reading the first three books in THE LUNAR CHRONICLES are answered in this book and there is also a lot of extra information you’ll learn that you didn’t even know you wanted.

While reading this book will teach you a lot about Levana and her tragic life, it won’t necessarily make you feel sympathy for her. This is a good thing, because as readers of the previous books know, she is a profoundly evil character who commits unforgivable atrocities. The story also does a great job setting the scene for the series’ final book, WINTER. All major fans of the series should read FAIREST, and casual fans of the series should also consider reading it because it adds a lot to the world, and also to many of the characters, not just Levana.

“An interesting mash up of fairy tales and science fiction . . . a cross between Cinderella, Terminator, and Star Wars.” ―Entertainment Weekly