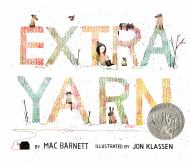 Annabelle lives in a cold, colorless town where everything is covered with snow and soot. One day, she stumbles upon a small box of colorful yarn, and she decides to knit herself a sweater. When she's finished, she finds she has extra yarn and decides to knit one for her dog. When she's finished with that, she is surprised to see that she still has extra yarn. When a boy in the town laughs at Annabelle and her dog, saying they look ridiculous, Annabelle can see that he is jealous, and she knits him a sweater, too. When her colorful sweater proves to be a distraction in school, she knits one for every one of her classmates,and her teacher. And still, she has extra yarn. In fact, Annabelle's colorful yarn seems to be never-ending; she knits and knits and knits until her entire town and all the people in it are adorned with her colorful creations, and yet she still has extra yarn.

The story of Annabelle and her never-ending yarn travels quickly, and many people from around the world come to meet her and see her work for themselves. One day, a rich and powerful archduke arrives and offers Annabelle one million, two million... even ten million dollars in exchange for her box of yarn. When she declines his offer, he takes matters into his own greedy hands and hires robbers to steal the box. But once he's got it, things don't go quite as he'd hoped; when he opens the box, it is empty. In a rage, he tosses the box out the window into the sea, and in time, of course, it floats right back to its rightful owner, Annabelle.

The fabulous richly-drawn illustrations by Jon Klassen are the perfect complement to Mac Barnett's text. In the beginning, the drawings are dark and sooty. But as Annabelle knits, Klassen adds pops of color to the pages, conveying the transforming effect Annabelle and her yarn are having on her surroundings. With its hints of magic, a nod to the timeless tales we've known and loved for years, and a traditional good-over-evil ending, this book has the makings and the feel of a modern classic.